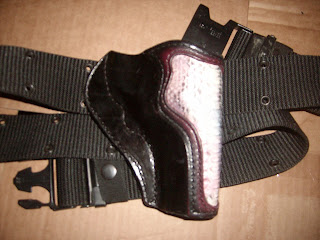 When i first received this holster and the Flatjack from Dennis at Dragon Leather Works I was not all that impressed with it's function although it is obviously an attractive piece of craftsmanship. While it still is not my choice for day to day carry a little bit of trial and error has shown me that it is in fact an effective holster provided that you use the correct type of belt. What I mean by this is fairly simple, if you order it with a loop for a 1.5" belt you need to actually use a belt of that size for it to fit correctly as it is not as forgiving as holsters which have more than one point of contact with the belt. For the same reason it helps quite a bit to use a reinforced belt rather than any old belt off the rack as all the weight of your firearm will be held to the belt by a single point of contact. I'll get to the construction of the holster itself a little further down as it is relevant to one of the tests i put it through in spite of being something other than what the Viper was intended for.

A couple things which have to do with personal preference more than anything else that I would like to point out here are that while my holster pictured above does not have a retention strap and is made for a 2" belt neither of those are required for a holster you purchase from Dennis as you are able to specify exactly how you want the holster made. The retention strap for example is a default addition unless the purchaser manually changes it in the order process. In fact you can customize pretty much every aspect of the holsters design in the same place so that each one is relatively Unique.

In addition to the normal tests we all tend to put a new holster through I also tested out it's ease of draw both with and without a covering garment although for my build it is less than effective for concealment as it does not hug the body the way the flatjack does and it performed without a hitch for these tasks. The most rigorous test i put it through however happened more as an accident when i went hunting this past deer season and bagged my first deer, I forgot my other holsters so the Viper got the job of holding my 357 as my father and i stumbled through the brush looking for game trails and/or deer. It didn't matter what i stumbled through briers  branches, mud, not once did my revolver budge from the viper and not once did the snaps which keep the holsters retention loop closed even look like they were getting loose. It may be prettier than the task demands but I will always use this holster on my hunting trips from now on after the reliability it demonstrated (I have to admit to having been concerned about the snaps and lack of a retention strap.)

If I ever purchase another Viper I will get the retention strap for the added security it offers when carrying around other humans rather than wildlife that is not interested in taking your weapon from you, but when used with an appropriate belt for the task it is a very effective and attractive holster for those of ya'll who unlike myself choose to open carry.
Posted by Mortalis09 at 1/07/2013 01:08:00 AM

Promote Your Page Too